Few companies are able to pride themselves on having worked through three different centuries. When Giovanni Cranchi opened his first workshop, Italy itself was yet to be unified, and the concept of luxury boats, as well as the concept of tourism, were yet to exist. In those years, marine engineering was almost completely devoted to commerce and to the military world; it is from within this context that Cranchi started taking his first’s steps.

Even though the official establishment of the company dates back to 1870, Giovanni Cranchi began his activities in 1866 in San Giovanni di Bellagio: in his small laboratory, he manufactured fishing boats and other ships for goods transportation across Lake Como.
However, The Company had to wait until the early 1930s to see its first dockyard. Giovanni (the grandson of the Giovanni founder) bought an ex dye-works building in Brienno which he adapted to fit his needs, laying the foundation of a momentous turning point in the boat construction industry.
In the 1950s, following a break from business due to World War 2, Giovanni Cranchi returned to Italy and, with the help of his sons once again took control of business, developing an authentic production line of wooden boats. During these years, iconic boats like Taunus, Faster, Sbarazzino and the Dinghy 12 P, along with a large series of sailboats, were designed and crafted thanks to the great passion and attention to detail that has characterized Cranchi’s brand through the years.

The years of the fibreglass boats worldwide

In 1970, the company was passed down to Giovanni’s son, Aldo Cranchi, under whose direction was relocated to Piantedo, a small city in Sondrio province, and the production of fibreglass boats began.
Up until the developmentt of fibreglass, boat production was still the work of craftsmen, but from that point on, a more industrialised kind of production began to take place. This change allowed the company to produce unique, high quality boats that were able to compete in the growing boat industry.

The debut fibreglass boat was the Pilotina 4.85, a compact model slightly longer than 4 meters (that later became 6 meters) thats sales reached 1550 units in the 1970’s. However, the real qualitative leap was achieved with the Scout, and it was thanks to its sales of 500 units all over the globe, that Cranchi became a brand recognised worldwide. .

The rise of the luxury yachts

Thanks to all its successes, the Piantedo dockyard was able to expand to 20.000m2 in the 1980’s and furthermore to its current size nowadays of 33.000m2. In order to keep up with the constantly growing worldwide demand, Cranchi had to establish new dockyards: the first one in San Giorgio di Nogaro, in Udine province, opened in the 2000 and 22.900 m² wide; the second one in Colico, in Lecco province, opened in 2003 and dedicated exclusively to the pre-assembly phase.
It is, however, the third new (implant) dockyard, opened in 2005 in Rogolo, in Sondrio province, known as Seventy Plant 4, that thanks to its 100.000 m², allowed the company to construct hulls over 15 Mt (42.20 Ft) long.
These innovative new dockyards made possible the production of the luxury yachts that make Cranchi the renowned brand that it is today. The last masterpieces born in this new innovative environment are the Panama 24 and 32, the Fifty 8 HT e the 54 Fly. Agile and quick, this 8 Mt long (26,25 Ft) yacht is perfect for those who want to enjoy a fast and thrilling experience on the waves, with the addition of comfort on the lower deck. 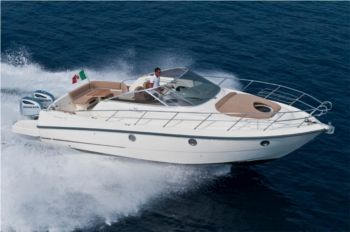 A More than 10 Mt long (32,80 Ft) yacht, equipped with 2 Honda fb 250hp outboard motors, each able to power the ship up to more than 35 knots. The wooden flooring of the cockpit and the deck makes it one of the most elegant boats. 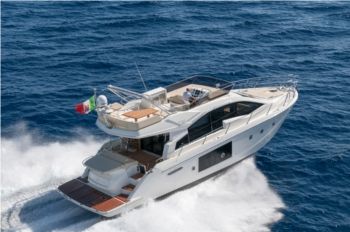 From the HardTop series, this yacht is 18,52 Mt long (60,76 Ft) and can be equipped with two 625HP Volvo Penta Ips 800 and two 725HP Volvo Penta Ips 900 engines. A vessel of power that can reach 35 knots. The three cockpits and the lower deck offers any desirable comfort.

Do you want to know more about Cranchi? Read also: Cranchi: The yachts that embody luxury.